Hardware support for CUDA is ubiquitous. Most gamer rigs have an NVIDIA GPU: 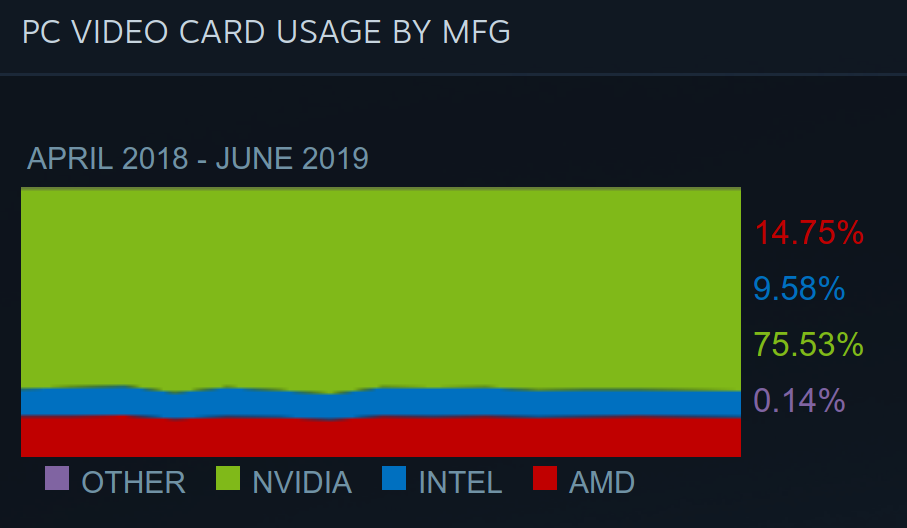 I was searching for CUDA projects a while back and kept finding scattered bits & pieces of information without any cohesive organization. It reminded me a bit of the era of x2ftp.oulu.fi, when finding comprehensive information about game development and demoscene techniques was an ordeal.

So I’m collecting some CUDA projects here to provide a breadcrumb trail for the next person to go down this path.

At some point I might write a bit of a UI to make it easier to search & filter these. But for now I’ve only got time for traditional HTML: just one long static vertical page of text and images.

(Note that this list leans toward real-time graphics, not simulations, AI/ML, crypto, or offline rendering.)

Igor Ševo’s A million particles in CUDA and OpenGL, running on a GeForce GTX 570:

Roger Allen’s Accelerated Ray Tracing in One Weekend in CUDA.

Beautiful. Here's some early footage from own #CUDA path tracer with camera movement. Not as optimized ;) https://t.co/kWDY3ill9k

And here it is running much faster on a Turing-class RTX 2080 Ti (no RTX features were used):

a sphere tracer. Has the interesting constraint that it only draws scenes that fit in the 64KB constant memory on the GPU.

Another CUDA port of ‘Ray Tracing in One Weekend’.

With CUDA and SDL, I can now change the position of the camera in real-time
based on @Peter_shirley raytracer
source https://t.co/0ebJZfwIx8 pic.twitter.com/LshxGfowLM

Clam4 lives! I rewrote, for 8th or 9th time, my fractal raytracer in C# (with CUDA rendering engine) to make it more portable. pic.twitter.com/UTDiWr3IVO

Sergii Kharagorgiev’s fractal_demo described here is a 3D fractal renderer. There’s not much about it online (Sergii’s site is down), no screenshots.

Peter Whidden’s Fat-Clouds, animations here, a fluid simulator in about 600 lines of code.

Miles Lacey’s basic ray marcher (depends on his cuda_math.h). Even though the filename of the image this snippet generates is cuda_sphere.ppm, it appears to render a torus:

Thierry Berger-Perrin is the originator of the ompf2 real-time raytracing form. Thierry wrote tokaspt (“The Once Known as SmallPT”), a CUDA port of SmallPT.

Tokaspt has had several offshoots:

If I understand correctly, NVIDIA Optix is built on top of CUDA. So technically projects using Optix are running CUDA – albeit through Optix’s abstractions and not calling CUDA directly.

Relying on Optix makes LH2’s raytracing infrastructure ‘optimal’ to a large degree - in the sense that it’s difficult to achieve faster performance with your own code:

"The ray tracing infrastructure (with related scene management acceleration structure maintenance) should be close to optimal." That's a bold statement or I'm reading it wrong.

Ingo Wald’s series on an Optix version of Raytracing in One Weekend:

OpenCL is the portable analogue to CUDA. It’s reportedly slower than CUDA (although some project report OpenCL to be faster).

David Bucciarelli wrote several OpenCL demos, which he compared to their CPU counterpart:

The GPU runtime is 10x faster than single-threaded CPU. However, multi-threading would close the gap quite a bit. An 8 core machine would otensibly achieve nearly the same performance.

There’s not a great guide to the CUDA toolkit samples, so I made my own by crawling the sources. It’s implemented as a (barebones) Datasette browser.

(That web app is running on a free Heroku Dyno instance which goes to sleep, so give it 5-20 seconds to boot if it’s slow to launch)

There are several recent projects without source code available. They’re still worth checking out because they’re newer and show the current state of the art.

This is a CUDA port of his earlier CPU voxel raytracer.

Voxel sphere ray tracing in CUDA, with a larger dataset. Running on a mobile 1060 here. Framerate should allow for a shadow ray per pixel, maybe a diffuse bounce? With some filtering this could work. :) pic.twitter.com/dhJSpFF5XY

Ray tracing a voxel sphere. Article on doing so efficiently with bent rays / 3DDDA through voxel chunks organized in shells around the sphere:https://t.co/eW6pmpXG8f pic.twitter.com/JcSotnxsBT

Decided a while ago to drop Optix, so here's my first-ever Cuda program - a voxel path tracer with single-bounce lighting. Runs at ~100fps on my RTX 2070 and isn't using any RTX features. Not optimized yet either. Not bad for the first day! #gamedev #voxels #indiegamedev pic.twitter.com/sBx0e4aaEN

Got back into Optix with the recent release of 6.0. Here's an experiment with multiple materials. The jagged edges are because the diamond is voxelized without sharp features. pic.twitter.com/hydFnygAsu

Spent a little bit of time today working on this project again. Now voxels emit light properly. There are still a couple minor issues to fix but it's actually usable! This was running constantly at 30 fps at 720p, 10 spp. #rtx #voxels #pathtracing #gamedev #indiegamedev pic.twitter.com/qcbYrwoiKN